Antigen/Immunogen: The immunogen consisted of full length ORF13 and was produced in E.coli

The immunogen consisted of full length ORF13 and was produced in E.coli

VZV ORF13 (UniProtKB – Q6QCP2) encodes a thymidylate synthetase (TS) which catalyzes the reductive methylation of deoxyuridylate to thymidylate. It is one of VZV’s five unique genes (ORF1, ORF2, ORF13, ORF32, and ORF57) not present in herpes simplex virus 1 (HSV-1). Our anti-VZV13 antibody VZ 13.15 detected ORF13 predominantly in the center of syncytia and the Golgi network. The interaction of ORF13 with ORF6, a component of the DNA helicase-primase complex, suggests a regulatory interaction between precursor synthesis and DNA encapsidation and implies the partial localization of ORF13 to the nucleus. This observation was confirmed by confocal analysis. Our anti-VZV13 antibody VZ 13.15 works in ELISA (on immunogen), IF (on VZV infected cells) and is validated for Western blot of VZV infected cell lysates, where it recognizes a protein of ~35 kDa, which corresponds well to the predicted size of the protein encoded by the VZV ORF 13 (described in J Virol. 2013 Jun;87(12):6943-54.). 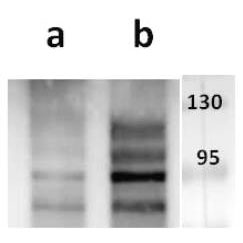 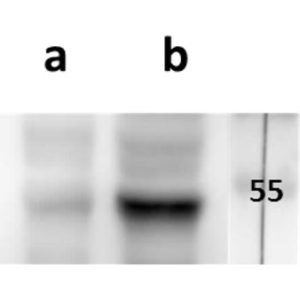 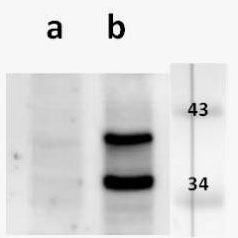 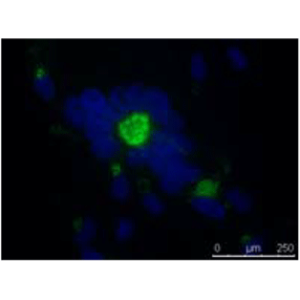 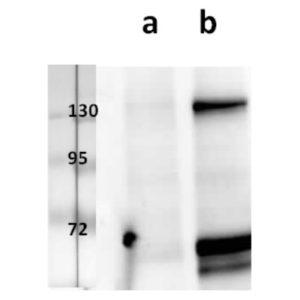 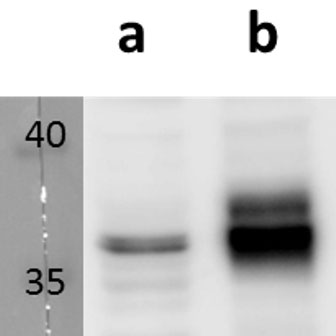